All entries filed under “Game Tables”

How Do You Table Tennis?

Table tennis is a great way to spend time with friends and family during the holiday season. It’s normally a therapeutic game—but what happens when it starts getting competitive? This guide shows you a few styles of holding your paddle, or bat, so you can find your rhythm and improve your game.

GRIP STYLES
There are three main categories of grip: shakehand, penholder and unorthodox. Most people use a variation of shakehand, while many eastern players use the penholder variation, and even fewer yet use a series of unorthodox paddle grips. Each one has its advantages and disadvantages. So, much like learning to snowboard, write, kick or throw a ball, you’ll have to learn which style suits you best.

SHAKEHAND GRIP
Pretend you’re shaking someone’s hand, but instead of a hand, you place the handle of the paddle in your palm. Your pinky, ring and middle fingers wrap around the handle, and your thumb rests comfortably on the top of the handle. Your pointer finger points straight along the bottom part of the rubber on the opposite rubber face as your thumb. 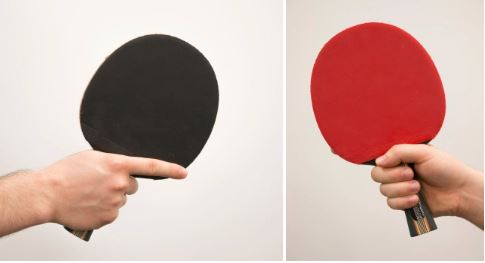 Pros:
The benefits of this all-around and popular grip are spin, power and reach. Most players use a variation of this grip because it offers a lot of flexibility. Free range of motion in the wrist allows you to perform several types of spin and serves without strain.

Cons:
There is only one main caveat of this hold. It forces players to make a split second decision in the case where the ball is hit directly center of the body—do you use your forehand or backhand? Good legwork and quick decision making can often save players from having to make this decision. 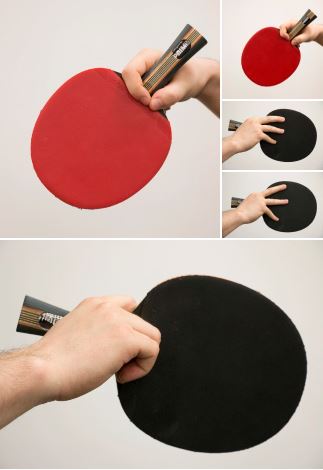 Pros:
The benefits of the penhold grip varieties are the natural feeling forehand and incredible topspin you can accomplish with this style. Many top eastern players use a penhold grip and stay competitive.

Cons:
The penhold grip doesn’t allow for the most versatile backhand motion and generally uses one side of the paddle—the forehand side—to rally the ball. This means that you’ll have a lot more legwork if you’re going to properly cover your backhand. If you’re dead set on the penhold grip, you can also rotate your wrist 180 degrees to perform a backhand with the opposite side of the paddle. This will allow you to perform a backhand with topspin, but is more difficult to master.

UNORTHODOX
There are a number of unorthodox grips that take variations of the previously mentioned grips and drastically change the holding style. For this guide, we’ll focus on the Seemiller grip, made famous by Daniel Seemiller. This grip is made by putting your thumb and pointer finger in the shape of an L and then continuing to grip like the shakehand option. You should end up with your pointer finger and thumb on opposite ends of the same rubber face.

Pros:
This grip heavily focuses on control of one side of the paddle. Your forehand is a lot more stable and powerful. You can also make good use of a pushing motion for most of your shots for controlled placement of the ball.

Cons:
This grip doesn’t use a backhand—it only uses one side of the paddle. This makes it difficult to contort and twist your arm to hit a backhand with any real control. Like the penhold grips, you can always focus on legwork, but some people prefer a more all-around grip.

Once you’ve had a chance to try all three and impress your coworkers, give us a shout and tell us which one you liked the best. Maybe we’ll feature an article on it.

The hottest look in Air Hockey® since Brunswick invented the game more than 30 years ago, the V-Force table rocks with state-of-the-art electronic scoring and exceptional speed of play. Aluminum rails with powder-coated metal corners accelerate the action. Super slick, scuff-proof “ice” helps keep the table looking sharp even after hours of intense competition. 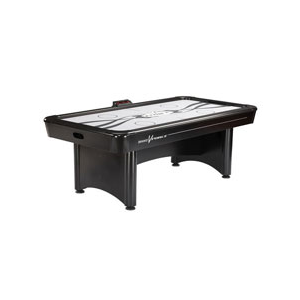 Your Single Destination For The Top Brands In Recreation

Pool City reserves the right to make changes to product information, promotions, and conditions of use at any time. All photos are for illustrative purposes only. Colors, product specifications and prices may be updated at any time by Pool City. We may terminate, change, suspend, or discontinue any aspect of the site at any time. Actual retail prices may vary. Please visit one of our retail locations for specific product pricing and availability. Tampering with the site, misrepresenting the identity of a user, using buying agents or conducting fraudulent activities on the site are prohibited.